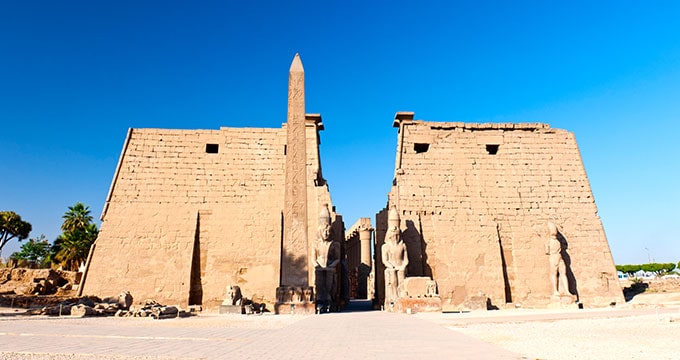 The Luxor Temple, located in the city of Luxor in Egypt, is one of the world's most iconic and mysterious ancient monuments. It has been a source of fascination for centuries, with its grandiose architecture, intricate hieroglyphics, and mysterious secrets that have yet to be fully uncovered. The temple was built over 4,000 years ago by Pharaoh Amenhotep III and his son Akhenaten. It was dedicated to the god Amun-Ra and served as a place of worship for the Egyptians.

The temple is made up of two parts: the outer court and the inner court. The outer court comprises a large courtyard surrounded by columns and statues of various gods. This area was used for rituals and ceremonies related to Amun-Ra. The inner court is where the main temple buildings are located. This area contains various chambers, including a hypostyle hall with 134 columns, an altar room, and several other rooms used for religious activities such as offerings to gods or mummification rituals.

The most impressive feature of Luxor Temple is its grandiose architecture which includes towering obelisks that stand guard over the entranceway to the temple complex. These obelisks were carved from granite blocks that weighed over 70 tons each! Inside the complex, several statues also depict various gods such as Amun-Ra, Horus, Anubis, Isis, Osiris, Hathor, Sekhmet and more.

Luxor Temple has been a source of mystery since its discovery in 1817 by French scholar Jean-Francois Champollion, who deciphered many of its hieroglyphic inscriptions using his knowledge of the Coptic language he learned while studying at Oxford University in England. Since then, many archaeologists have studied Luxor Temple to uncover its secrets, but much remains unknown about this incredible monument even today!

One thing we do know is that Luxor Temple was a significant place for Ancient Egyptians, who believed it was where their gods resided during certain times of the year when they would come down from heaven to bless them with good fortune or punish them with bad luck depending on their behaviour throughout the year!

Today Luxor Temple remains one of Egypt's most popular tourist attractions drawing thousands upon thousands of visitors each year who come to marvel at its grandeur and try to unlock some of its mysteries! If you ever find yourself in Egypt, take some time to visit this incredible monument – you won't regret it!